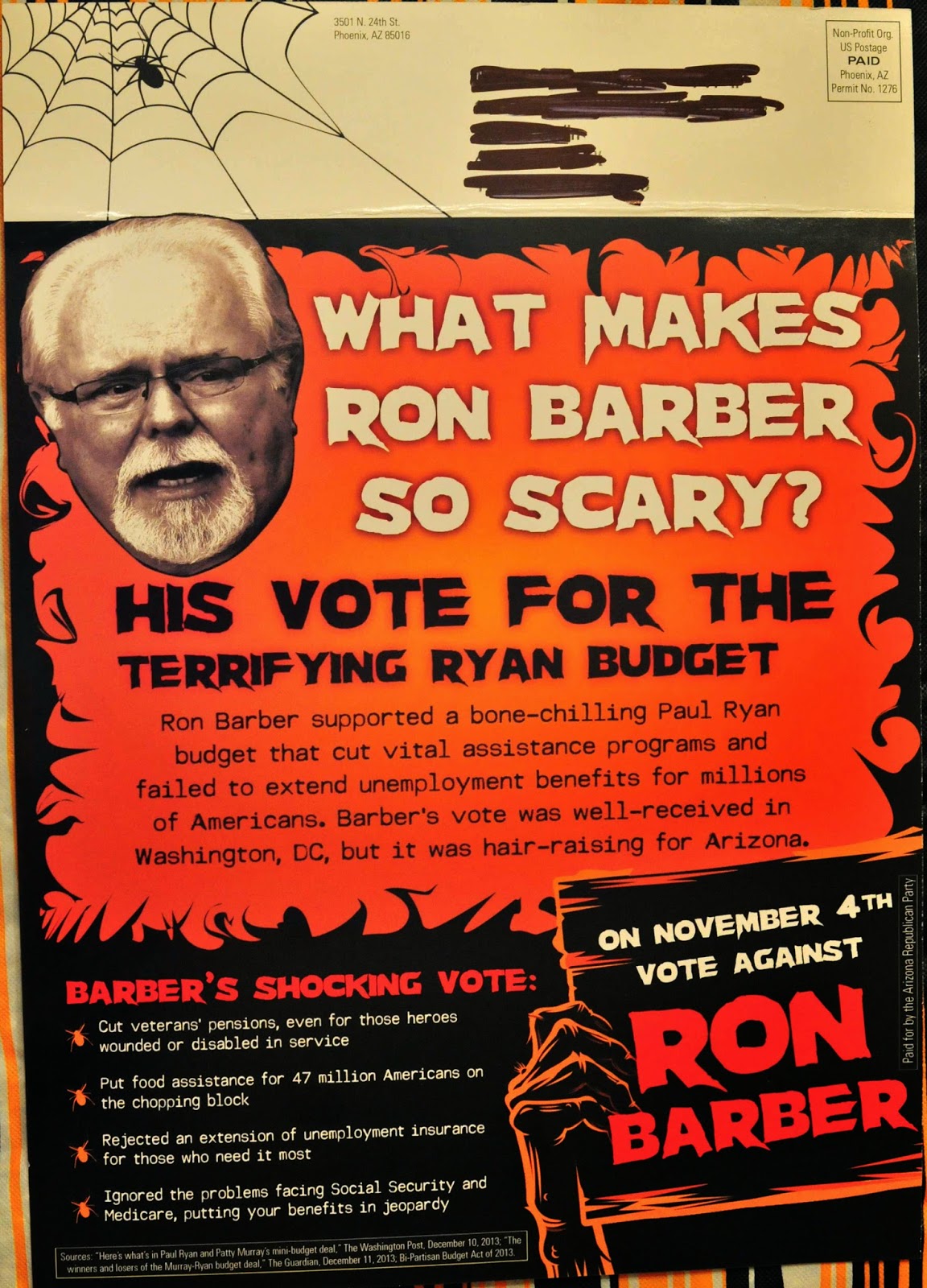 Late last night I found in our mailbox a campaign piece that just knocked my socks off, even in today's world of unlimited billionaire-powered propaganda. As you see above, the piece accuses Tucson Democratic House Representative Ron Barber (Gabby Gifford's old district) of voting for the Paul Ryan Budget, and how horrifying that budget is – their budget! I contacted Dylan Matthews of Ezra Klein's Vox about it, and he verified it, and now has a post up.

It's like the fast food industry saying don't vote for Jack LaLane, he supports the junk food diet, with all the horrors of that diet. Instead, vote for the representative of the fast food industry that created and sells that diet! It's an astounding level of lying and Chutzpah, even by today's standards. For three years straight the Ryan budget passed the house 100% with Republican votes, not a single Democratic vote. For crying out loud, Paul Ryan was the Republican Vice-Presidential candidate last election!

Update: I see it's now also up at Kevin Drum's Mother Jones' blog and Huffington Post. And from ABC Chief Whitehouse Correspondent Jonathan Karl, "About as cynical and misleading as it gets".
Posted by Richard H. Serlin at 12:21 PM

"Richard Serlin, in comments at Mark Thoma’s place, makes a very good point..." – Paul Krugman, Nobel Prize winning economist and New York Times columnist and blogger
"Richard Serlin left a smart comment..." – Ezra Klein, Washington Post columnist and founder of Wonkblog and Vox.
"This argument will mirror similar points made in an excellent post by Richard Serlin in the context of finance." – Simon Wren-Lewis, Oxford economist
"Mike Konczal sends me a great quote from Richard Serlin, I’m not sure exactly where it comes from, but it’s spot-on." – Felix Salmon, Reuters finance blogger
"Richard Serlin, who has made himself one of the world’s experts on Neil Wallace’s original paper, was good enough to agree to write a guest post..." – Miles Kimball, University of Michigan economist, and one of the founders of New Keynesian Economics
"Richard Serlin (HT Mark Thoma) gives the bottom line intuition of Wallace neutrality... " – Bruegal blog, EU economics think tank, considered one of the best in the world
"This issue of Wallace (1981) neutrality as relates to QE has recently become the subject of blogosphere debate. See, for instance, Richard H. Serlin..." – World Economic Forum blog
"There are some very smart people, like Richard Serlin, who thinks..." – Mike Konczal, Roosevelt Institute fellow and blogger

Richard H. Serlin
I am an adjunct professor for the University of Arizona where I teach one of the largest personal finance courses in the country, with over 500 students per year. I hold an MBA from the University of Michigan and have completed all coursework and written exams for a Ph.D. in finance from the University of Arizona. I am also president and co-founder of Summit Personal Finance Education, a U.S. Trustees approved provider of a personal finance course, designed by myself, which meets the requirements for bankruptcy filers under the BAPCPA law of 2005.

I edit and improve most of my posts after I initially place them. I will not hesitate to do this, and without cross-outs, as my main goal is to teach and discuss clearly and well, to help with understanding and good idea creation, not to leave a historically accurate evolution of my writing. In fact, if you think the writing of a post has clunky spots or mistakes, you might want to try looking at it hours or days later. These things may be fixed, plus valuable new material may have been added. My writing really tends to improve with seasoning.

I will, however, note if I have made a major change of opinion, or corrected an important mistake of fact that could be substantially harmful to a person or party. This is subject to interpretation, however. For example, if the post was up for two minutes before I fixed it, I may not write a correction note. Unless my blog traffic greatly increases, it's unlikely many people, or any people, saw it.